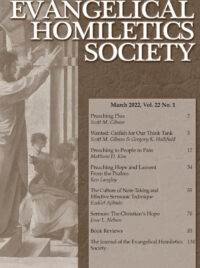 Simplify the Message: Multiply the Impact by Talbot Davis (Reviewer: Christopher Priestaf) Preaching for a Verdict: Recovering the Role of Exhortation by J. Josh Smith (Reviewer: Jody Alan Wolf) Preaching to People in Pain: How Suffering Can Shape Your Sermons and Connect with Your Congregation by Matthew D. Kim (Reviewer: Jeffrey Arthurs) Apostle of Persuasion: [...]

The Culture of Note-Taking and Effective Sermonic Technique

Sermon note-taking has long been practiced in various “church cultures,” and some may wonder about the future of the practice. Challenges to note-taking include secondary orality, the emergence of the digitoral generation, and the technologization of the world. This paper, engages with homiletics, systematic theology, communication studies, and discipleship studies to demonstrate the relevance of [...]

Preaching Hope and Lament from the Psalms

“Why are you downcast, O my soul? Why so disturbed within me? Put your hope in God, for I will yet praise him, my Savior and my God. My soul is downcast with in me; therefore I will remember you from the land of the Jordan . . . Deep calls to deep in the [...]

Preaching to People in Pain

For this conference, Jesse Nelson asked me to speak about a new publication, Preaching to People in Pain. This book released in May of 2021 with Baker Academic. It’s a book that has long been on my heart as someone who has pastored people who are broken and hurting. How many of you have broken [...]

Wanted: Catfish for Our Think Tank

What is needed are holy healthy places for thinking, interaction, and engagement without intellectual prejudice or divisiveness. We need think tanks more than we need labs. Our Evangelical Homiletics Society is not so much a lab as it is a think tank. A think tank consists of a body of experts who share ideas and [...]

There might be variations of homiletical math. In my teaching of Haddon Robinson’s philosophy of preaching I instruct my students that to get the idea of a passage one uses the following homiletical math formula: S + C = I. That is, subject question plus the complement answer equals the exegetical idea. But it strikes [...]